Rod Culleton and Wayne Glew teamed up as candidates for the right-wing “Great Australia Party” (GAP) in the 2019 Federal Election. Based in an ideology of constitutional conspiracy and popularism, they ran on the platform that they were going to “restore the Commonwealth”. 29

The party fielded two Senate candidates in New South Wales, Queensland, South Australia, Victoria and Western Australia. Policies of the party include the removal of personal income tax, nationalization of the Commonwealth Bank and abolishment of the Family Court of Australia.3 The Party also proposes to implement trials by jury only in criminal matters, naming of young criminals who are serial offenders and the restoration of the “true” Constitution of Australia. 4 The Party further proposes a policy that criminal offenders would have sale of their property used as a possible deterrent. 5

Party Leader Rod Culleton has on numerous occasions declared the Australian legal system is invalid and thus so are Australian Courts, 6 refusing to co-operate on numerous occasions by refusing to hand over documents or attend public examinations. Creditors were advised there was no prospect of recovering any of their money. 7 Culleton continued to refer to himself as a “senator-in-exile” and sought to appeal his disqualification to the Privy Council of the United Kingdom. 8

What Rod Culleton understood as the current “unconstitutional” issues, and the path forward in the “restoration of the Commonwealth” were outlined in Rod Culleton’s Prayer to the UK House of Lords 7 November 2018 (PDF 6 pages) see also Rod Culleton’s letter to Queen Elizabeth II 18 January 2019 (PDF 4 pages) 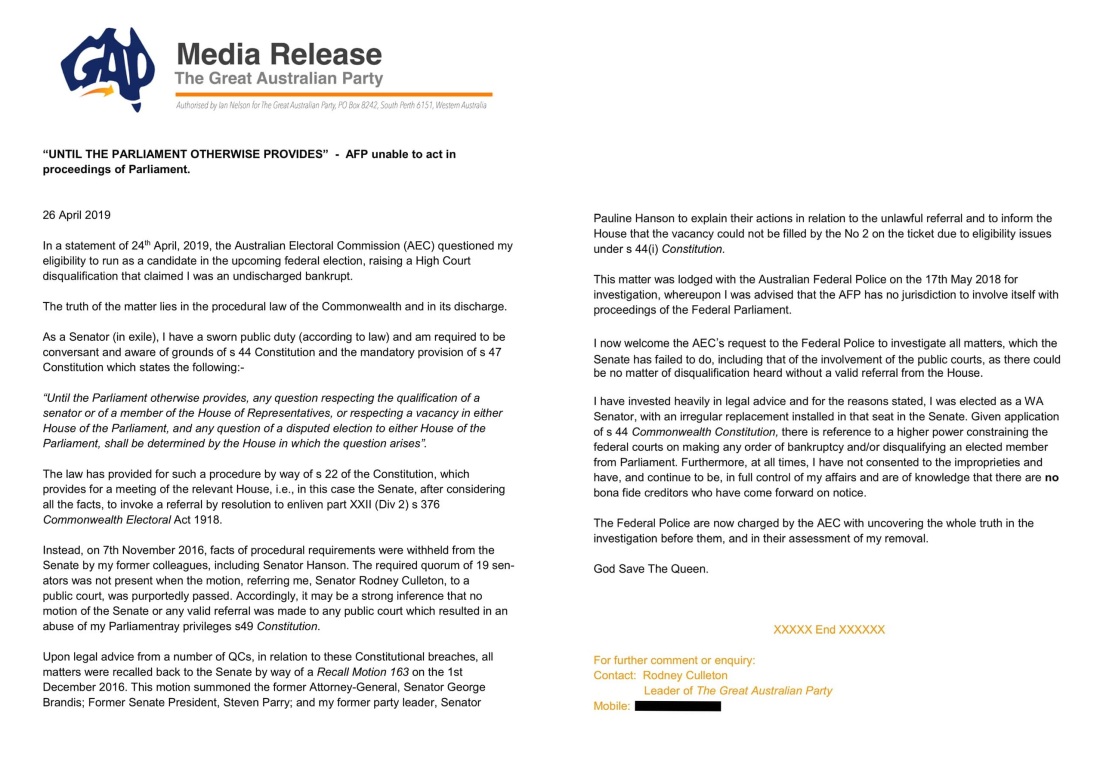 On 24 April 2019, the AEC referred Culleton’s Senate nomination form to the Australian Federal Police “to examine if a false declaration has been made under provisions of the Criminal Code Act 1995, relating to his status as an undischarged bankrupt and the prima facie disqualification of such persons to be chosen or to sit as a Senator or Member of the House of Representatives under section 44(iii) of the Constitution”. 9 The AEC stated that, while it did not have power to reject a fully completed nomination form or to make its own assessment of a candidate’s eligibility, it had been aware from a High Court judgment that Culleton had been a declared bankrupt and, upon checking the National Personal Insolvency Index, had found that he was currently listed as an undischarged bankrupt. 10

On 2 May 2019, the AEC confirmed that Culleton’s Party controversially may be eligible for public funding just for appearing on the ballot paper. This is despite a bankrupt being “incapable of being chosen” as a member of parliament, pursuant to section 44 of the Constitution. 2 The AEC also stated they did not have the power to decide if a candidate is ineligible. 11 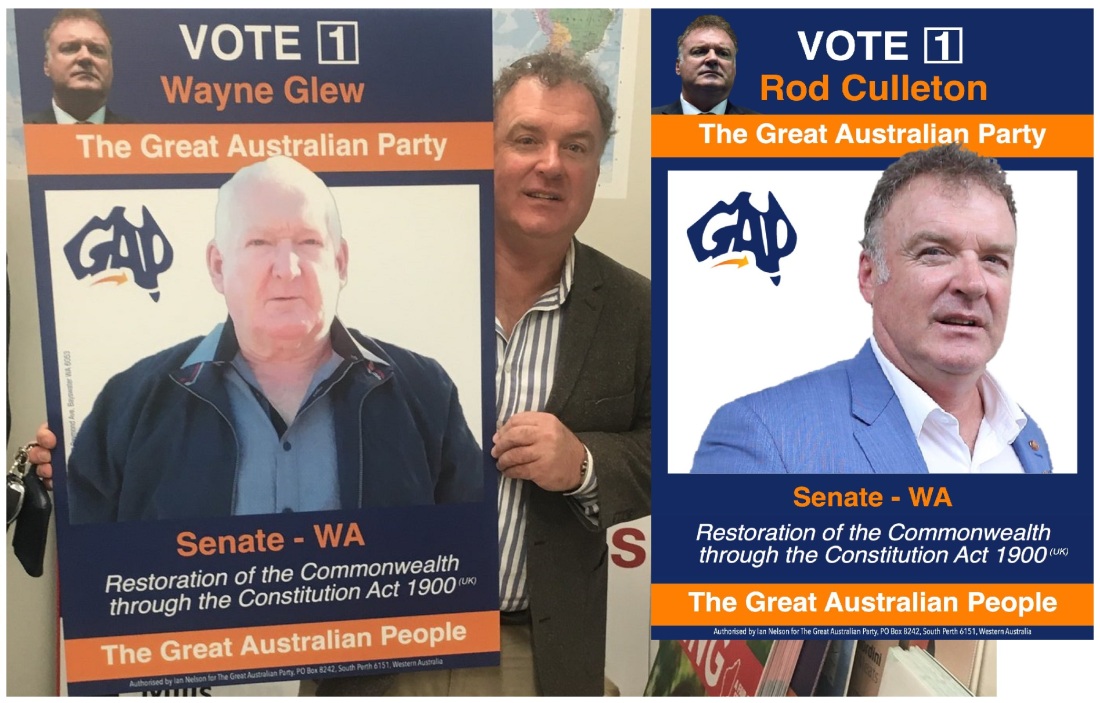 On 23 December 2011 Glew was convicted in the Geraldton Magistrates’ Court of one offence of assaulting a public officer and one offence of obstructing an officer in the execution of his duty. 12 Glew provided legal advice to Heather Glendinning, who later killed herself and her two daughters in a murder–suicide in 2011. He subsequently told The West Australian that she had been murdered, and that “I spent 17 years in the police and you can make anything look like anything”. 13 In 2012, Glew was ordered to pay $2 million in damages to an investor in his fuel vaporiser system. The Supreme Court found that his invention “offered no benefit over existing fuel systems” and that he had engaged in “deceptive and misleading conduct”. 14

On 8 May 2019 a group of intoxicated Great Australian Party supporters campaigning outside a polling booth in Cockburn, WA verbally abused a 70 year old woman and her husband.

Police were required to attend to intervene. In a later statement Culleton denied the supporters were registered with the Party.

Follow FREEMAN DELUSION: The Organised Pseudolegal Commercial Argument in Australia on WordPress.com
Create your website at WordPress.com
Get started